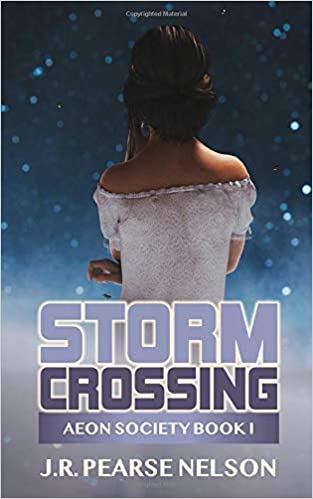 A secret society guards the gates between worlds…but they’re not all good guys.

The mission sounds simple. Travel to Earth, collect the commander’s daughter, and bring her back to Aeon. But any thought of simple ends when Caleb meets the woman in question.

Bristol thought she’d always have to hide her power. Until a leather-clad warrior like something out of a fantasy novel steps into her library and speaks her name.

She doesn’t want to follow him, but his message could only come from one source: Her mother. Rosaline is a traveler, unreliable…a flake. They share the gift of storm and little else. What Caleb says can’t possibly be true. Mom would have told her if she was one of the leaders of a magical secret society…wouldn’t she?

Caleb prides himself on always doing the right thing…for everyone else. It’s never been hard to put duty first in the past. But when Bristol is threatened, his need to protect her has nothing to do with the commander’s orders.

Follow Caleb and Bristol through the gates and into a whole new world in this first Aeon Society fantasy romance.

Continue the adventure with Magic Reigns, June and Henry’s story!