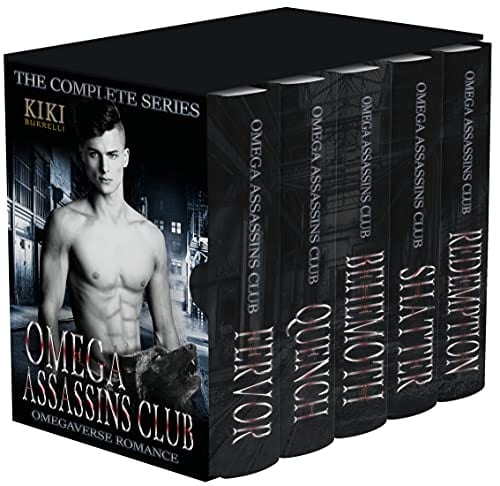 The agents of the Omega Assassins Club are the only force keeping the cruel and powerful from doing what they want—no matter who gets hurt. As dangerous as they are attractive, these assassins can protect themselves from everything but love.

Born an omega. Raised an assassin. Wynn finds solace in taking out the world’s worst alphas. But when he’s given his next assignment, a billionaire alpha inventor creating tech designed to steal even more autonomy from omegas, nothing about the mission feels right. The gentle alpha doesn’t make Wynn’s blood boil with rage, but passion. All Wynn can be sure of is that something about the mission isn’t adding up and he needs to find out what before they send another assassin to finish the job.

After an operation goes wrong, Van receives orders to lay low. He knows the man he’d like to lay with, but he never expects the stern, sexy alpha to offer him a place to stay. Life on the alpha’s farm is so unlike the grind of the city, Van can finally relax and let his guard down. Just as Van relinquishes the tight control he’s kept over his life, his past catches up with him, putting not just Van, but his alpha and four omega sons in danger. Can Van be an assassin and mate or will life force him to choose?

River is a pint-sized assassin who isn’t afraid of going toe-to-toe with the big bad wolf. He’s been trailing his target—a hitman who’d come close to killing his friend—all over town when River finally gets his shot. Except then the omega does something he’s never done on the job before. He hesitates. The moment of indecision costs him his freedom and he’s captured—restrained by the very alpha he’d been sent to terminate. Is there more to the hulking alpha hitman than meets the eye or did River just sign his death warrant?

The Omega Assassins Club is the one place Nolan feels like he belongs. Left behind by his childhood sweetheart—the only alpha to ever show him kindness—Nolan became a strong omega with a hatred for alphas that burns brighter than any other agent in the OAC. After getting caught in the wrong place at the wrong time, Nolan finds himself needing the protection of the one man he’s spent his life trying to forget. The alpha had been the one to abandon Nolan, so why is the alpha the one with betrayal shining in his eyes? Nolan decides he’ll let the alpha protect him, but only for as long as it takes Nolan to get his answers. That is, if he isn’t framed for murder first.

Yanked from duty, Zed is furious to be benched and exiled to the sticks. He knows the director of the OAC, Remington, is only trying to make it easier to ignore how he feels for the omega. Zed lands squarely in the lap of Peppa, a young single omega father and ranch mentor reeling from a deception that had turned his life upside down. Peppa’s calming nature soothes Zed in a way no one else has—not even Remington. When the director comes to protect the two omegas from an old enemy, the three men realize they may be opposites of each other, but together, they burn.