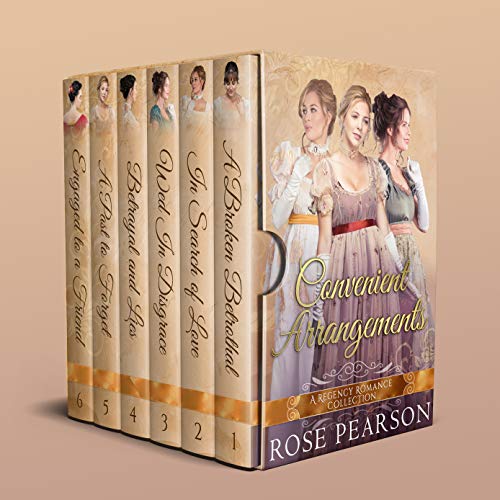 The Convenient Arrangements series tells the stories of ladies who manage to find love and a Happy Ever After amidst some difficult situations!
A Broken Betrothal
Two nobles, destined to marry yet at each other’s throats. Can they reconcile their differences?
When Lord Pendleton loses his brother, his entire world changes. Inheriting the title of Marquess of Leicestershire, he soon finds himself surrounded by nobles and sought-after by their daughters. He becomes determined to make a name for himself – and not be seen as a rogue like his late brother.
Lady Augusta is destined to be married to Lord Leicestershire in a rigid, business-like agreement. Hating her father at first for not letting her choose her own husband, over time she grows to accept it – but she finds herself thrust aside by his newfound status.
With Lord Leicestershire hounded by ladies and faced with distractions at every turn, will he and Lady Augusta be able to make their coming marriage work? Or will the strife between them be too much to overcome?

In Search of Love
A lady in her third Season. A lord who is a rake. A case of mistaken identity changes their lives.
Miss Julianna Martins is in her third Season and will soon be a spinster. However, a moment of mistaken identity sets her into a whirlwind– and she is forced to wed a rake she has never once set eyes on before.
When her husband, Lord Altringham, leaves her in the country and returns to London, Julianna plucks up the courage to take a step forward in her life.
Finding courage she didn’t know existed, she sets out to force her husband to get to know her and maybe even fall in love with her! Can she do it?

Betrayal and Lies
A lady in exchange for debt. Is there any way out for Lady Christina?
Lady Christina is stunned to learn that her father, Lord Enfield, is heavily in debt and the Baron holding the cards wants the family estate and her hand in marriage for his son.
She desperately hopes her suitor, Lord Harlow, has a solution so they can be together.
Can he puzzle a way out of this mess?

A Past to Forget
A past relationship threatens their future. Can they clear his name and find happiness together?
Miss Brooks must marry Viscount Stafford, although she knows nothing about him.
Viscount Stafford is shunned by society for something from his past. Wanting to protect her from society’s gossips, he ends their engagement.
But he didn’t count on Miss Brooks’ persistence and loyalty.
Can she help him clear his name? And possibly even forgive him?