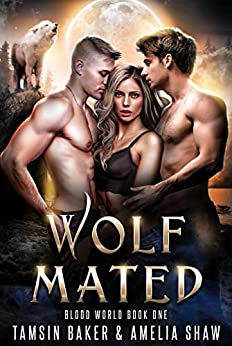 Sadie is no stranger to conflict, but nothing could have prepared her to take over her father’s bounty hunter workshop… When a protective wolf shifter and a possessive dragon shifter turn up on her door, both claiming to be her mates, Sadie knows she can’t cave to her desires. Not with her father’s killer still on the loose.

As she fights the pull to the two arrogant, sexy, smoking hot shifters, she inadvertently discovers something a lot more sinister than her father’s murder going on. The Vampires are hunting for something, and Sadie is determined to find out what it is. But as she seeks answers, she soon discovers the biggest problem of all: Sadie is no longer the hunter. She’s just become the prey.

Scroll up and one click today for a Why Choose Reverse Harem paranormal romance packed with action, adventure, two bounty hunters, an ancient Vampire, and a woman with the rarest blood in town!

*** This is the FIRST book of the series and ends with a set up for book two. This series is best read in order.